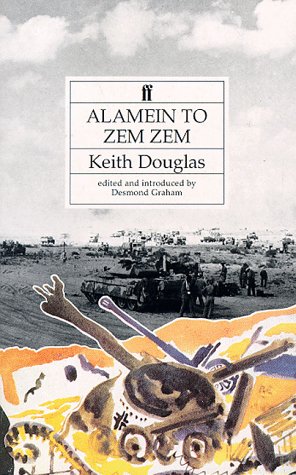 Alamein to Zem Zem by Keith Douglas First published by Editions Poetry London (1946) republished by Faber and Faber (1966), Penguin Modern Classics (1969), Oxford University Press (1979) and again by Faber and Faber (1992).
Introduced by Richard Skinner
My grandfather, Captain Alexander Greig, served in North Africa during the Second World War. He fought in the battle of El Alamein with the 8th Army, one of the divisions affectionately known as the ‘Desert Rats’. I have a picture of him in uniform sitting on a camel. My grandfather died when I was a small child and I don’t remember him, but every time we visited my Nana, I would look at his small collection of books that she kept in a locked glass cabinet. These books were mostly about Rommel, and my Nana told me that my grandfather always expressed enormous respect for the German field marshal. Ever since then, the word ‘Alamein’ has had a tremendous significance in my family.

So, when I came across a copy of Alamein to Zem Zem in a secondhand bookshop more than 20 years ago, I immediately bought it. I knew of and loved Keith Douglas the poet, but had no idea he had written a memoir of his wartime experiences. And what a stunning memoir it is – written immediately after the events it depicts. Douglas’ prose is lucid and direct and sounds so fresh that it feels as though it could have been written yesterday. It is entirely free of that kind of dated English language we now associate with contemporary works such as Waugh’s Brideshead Revisited or David Lean’s film of Noel Coward’s Brief Encounter.

As well as being the finest English poet to emerge from the Second World War, Douglas was also a talented graphic artist and he possessed an artist’s mix of detachment and curiosity, which meant that he could get up, close and personal to the horrors of the war without flinching. His memoir is full of the most incredible drawings and linguistic images: ‘Every man had a white mask of dust in which, if he wore no goggles, his eyes showed like a clown’s eyes.’ Laying down to sleep out in the cold desert night, he describes the lights in the sky as ‘starshells, tracers of orange, green, blue, and a harsh white, and the deeper colour of explosions.’

His account is also very good at capturing the physical sensations of being in battle. A few hours before his first engagement, he describes his feelings as the ‘unstable lightness which is felt physically immediately after putting down a heavy weight.’ The view from his moving tank he says is like ‘a camera obscura or a silent film … which led me to feel that the country into which we were now moving was a strange land, quite unrelated to real life, like the scenes in ‘The Cabinet of Doctor Caligari’.’

Keith Douglas was born on 24 January 1920 and was fascinated by all things military as a child, perhaps because his absent father had been an army captain during the First World War. He went to Christ’s Hospital school and later read English & History at Oxford. He was impulsive, precocious and developed a profound disregard for authority, resulting in a near expulsion from Christ’s Hospital over a stolen training rifle. His antipathy towards the establishment continued at Oxford, where he wrote vaguely anti-war poems. And yet, as soon as war broke out, he joined the Sherwood Rangers as a cavalry officer. This contradiction was typical of Douglas’ complex nature.
After an administrative spell with the Sherwood Rangers in Palestine, Douglas was due to be sent back to England for more training. He was desperate for the experience of war and so, against direct orders, he famously made his own way to his unit, which was now in theatre in Egypt. No one immediately seemed to notice his absence and Douglas remained in the Middle East with the Sherwood Rangers until 1943, when he returned to England to retrain for the D-Day invasions. On 6 June 1944, Douglas took part in the main assault on the Normandy beaches. Three days later, he was killed by mortar fire near Tilly-sur-Seulles while returning from a patrol. He was just 24 years old.

The war for Douglas was a Nietzschean self-examination of willpower and endurance and he mentions several times that his reasons for joining up were not just ideological, but also highly personal. As a soldier, he was passionate, uncompromising—the kind of person you would want as a leader in wartime. As his batman said to him, ‘I like you sir. You’re shit or bust, you are.’

As in his poems, there is a meditation on the metaphysical that runs throughout the book, almost as though he were a criminal, feeling for his own pulse whilst in the middle of a crime. Death was, for Douglas, a moment of transformation. He describes his experiences in this beautiful memoir as like ‘having walked through the looking-glass which touches a man entering a battle.’ My grandfather would have concurred, I’m sure.

UNICORNS, ALMOST – a new one-man play by Owen Sheers about the life and work of Keith Douglas will premiere in Hay-on-Wye in May 2018. It will be directed by John Retallack and is produced by The Story of Books. 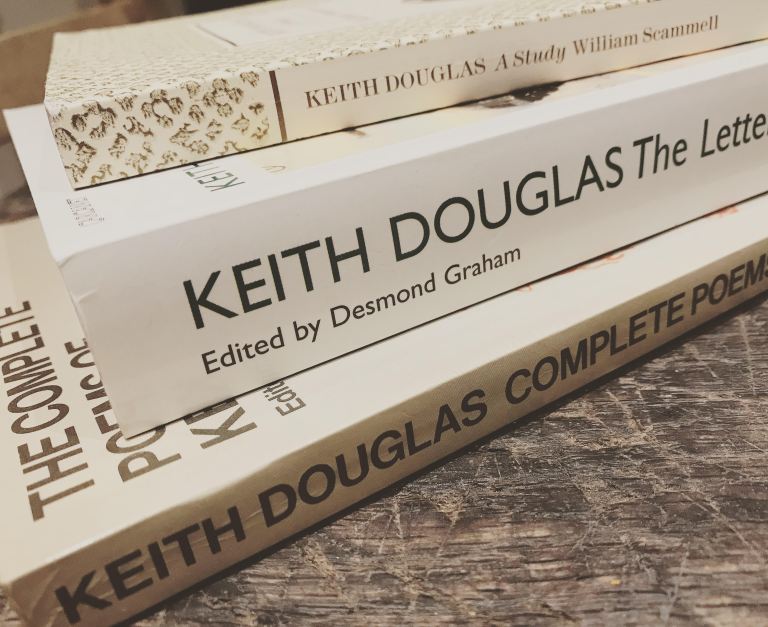