Shortlisted for the 2016 Kate Greenaway Medal and winner of several other awards, the wordless picturebook Footpath Flowers (originally titled Sidewalk Flowers when it was first published by Groundwood Books in Canada) was conceived by the Canadian writer and poet JonArno Lawson. Lawson created the initial plot line and storyboard sketches, and these were then realised in detail by the illustrator Sydney Smith. It was clearly a successful partnership, as Lawson has said, ‘It was as if I’d written a melody, and he [Smith] wrote not just an accompaniment, but an entirely new melody that harmonized with it.’

The plot centres round a little girl who collects wayside flowers on a walk with her father. It is set in a contemporary urban landscape and begins in austere high-contrast black, white and grey, with the girl’s bright red coat providing the only hint of colour. Yet as the child gathers more plants and flowers and gives them as gifts to various recipients around the city, the volume of colour increases, until finally the book ends in vivid full colour.

Smith painted Footpath Flowers in brush, ink and watercolour, and his line is generally quite loose and fluid. However the larger buildings and a gloomy underpass are drawn in heavier, darker strokes, with strong horizontal and vertical lines, giving them strength, solidity and even an element of threat. But as the book progresses, these rigid, regular patterns of the man-made struts, railings and brickwork give way to the softer, more sinuous patterns of the trees and grasses, emphasising the positive influence of the natural world. 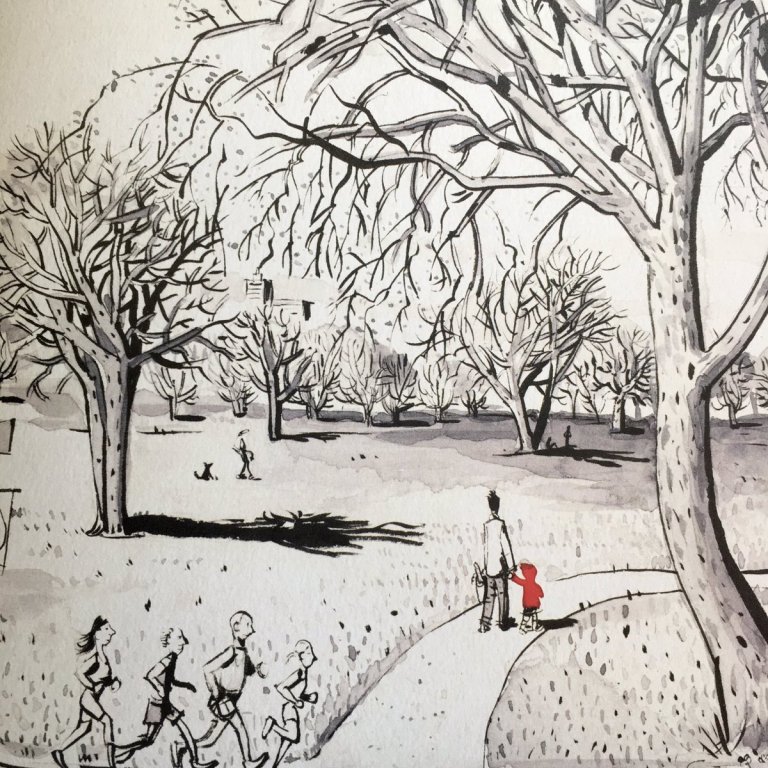 Although a pre-school child could easily understand and enjoy the main storyline in this book, there are elements in the images that speak directly to the adult reader. For instance there is clearly a separate narrative around the distracted father that a child might miss, and there are also other potential stories around incidental characters that a grown-up would be more likely to pick up on. But the kindly protagonist, the detailed observation of bustling city life and the gentle humour should appeal equally to both child and adult audiences.

In the final scenes we see the girl and her father returning to the street where they live. The child’s arrival back home gives the book a deeper resonance, as it shows that, far than being ‘alone’ in an impersonal city, she is actually part of a secure loving family. It’s a supremely satisfying end to a tender story of an independent, creative and warm-hearted young girl.

Clare Walters is a journalist and writer of children’s picture books. She has a personal collection of more than 200 wordless picture books from around the world.