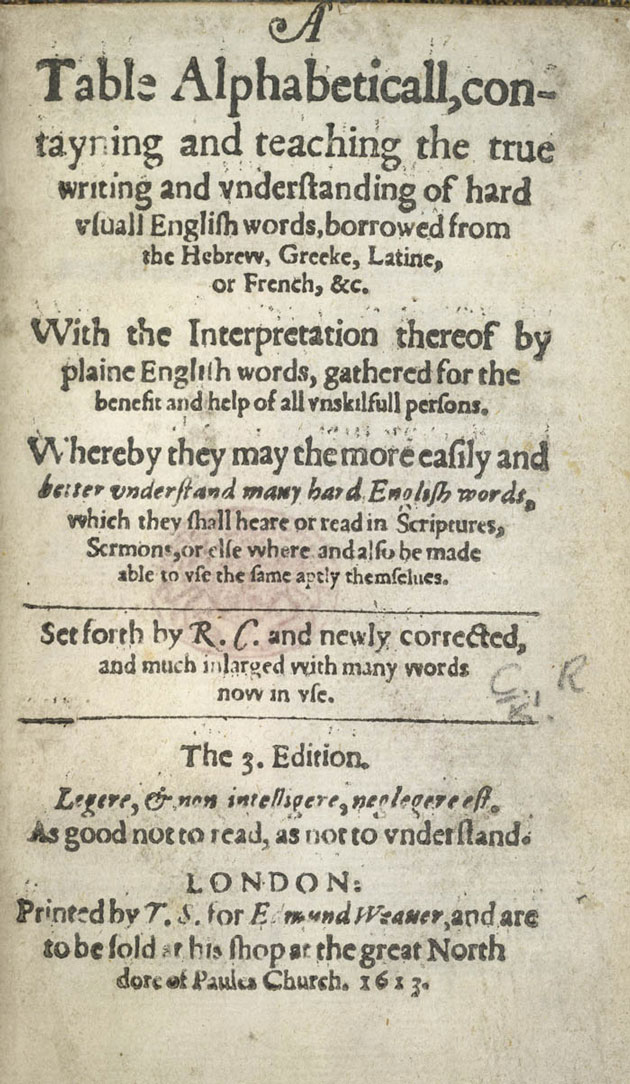 Robert Cawdrey’s Table Alphabeticall, published in 1604, was the first single-language English dictionary ever published. It lists 2449 words, defining each one with a simple and brief description. It did not include any words beginning with the letters W, X, or Y.

At the turn of the 17th century the English language was expanding – influenced by trade, travel and new innovations in the fields of arts and sciences. The Table Alphabeticall was an attempt to explain words that were unfamiliar to the general public. 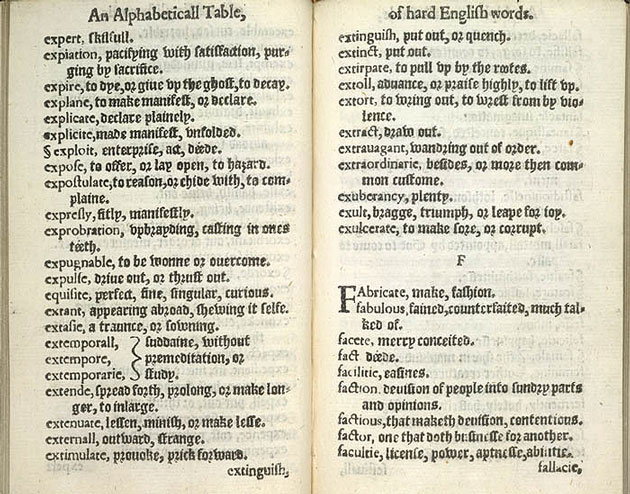 In the preface to the dictionary Cawdrey, a schoolmaster, criticises the poor standard of English spoken by people at the time: while some simplified their speech ‘so that the most ignorant may well understand them’ , others decorated their sentences with fancy phrases and complicated words, ‘forgetting altogether their mothers language, so that if some of their mothers were alive, they were not able to tell or vnderstand what they say.’ He writes of how ‘far journied gentlemen’ collect words on their travels and, coming home, ‘pouder their talke with over-sea language.’

Cawdrey wanted the English language to be better organised and felt his book might help the reader to understand challenging words.

Such as by their place and calling (but especially Preachers) as have occasion to speak publiquely before the ignorant people, are to be admonished, that they never affect any strange inckhorne tearmes, but labour to speake so as is commonly received, and so as the most ignorant may well understand them: neyther seeking to be ouer fine or curious, nor yet liuing over carelesse, using their speach as most men doe, and ordering their wits as the fewest have done. Some men seeke so far for outlandish English, that they forget altogether their mothers language, so that if some of their mothers were alive, they were not able to tell or understand what they say; and yet these fine English Clearkes will say they speake in their mother tongue; but one might well charge them for counterfayting the Kings English. Also, some far journied gentlemen, at their returne home, like [as they love to goe in forraine apparrell, so they will pouder their talke with over-sea language.

Find out more about the Table Alphabeticall on the British Library website here.

The only surviving copy of Table Alphabeticall is in the Bodleian Library, University of Oxford.