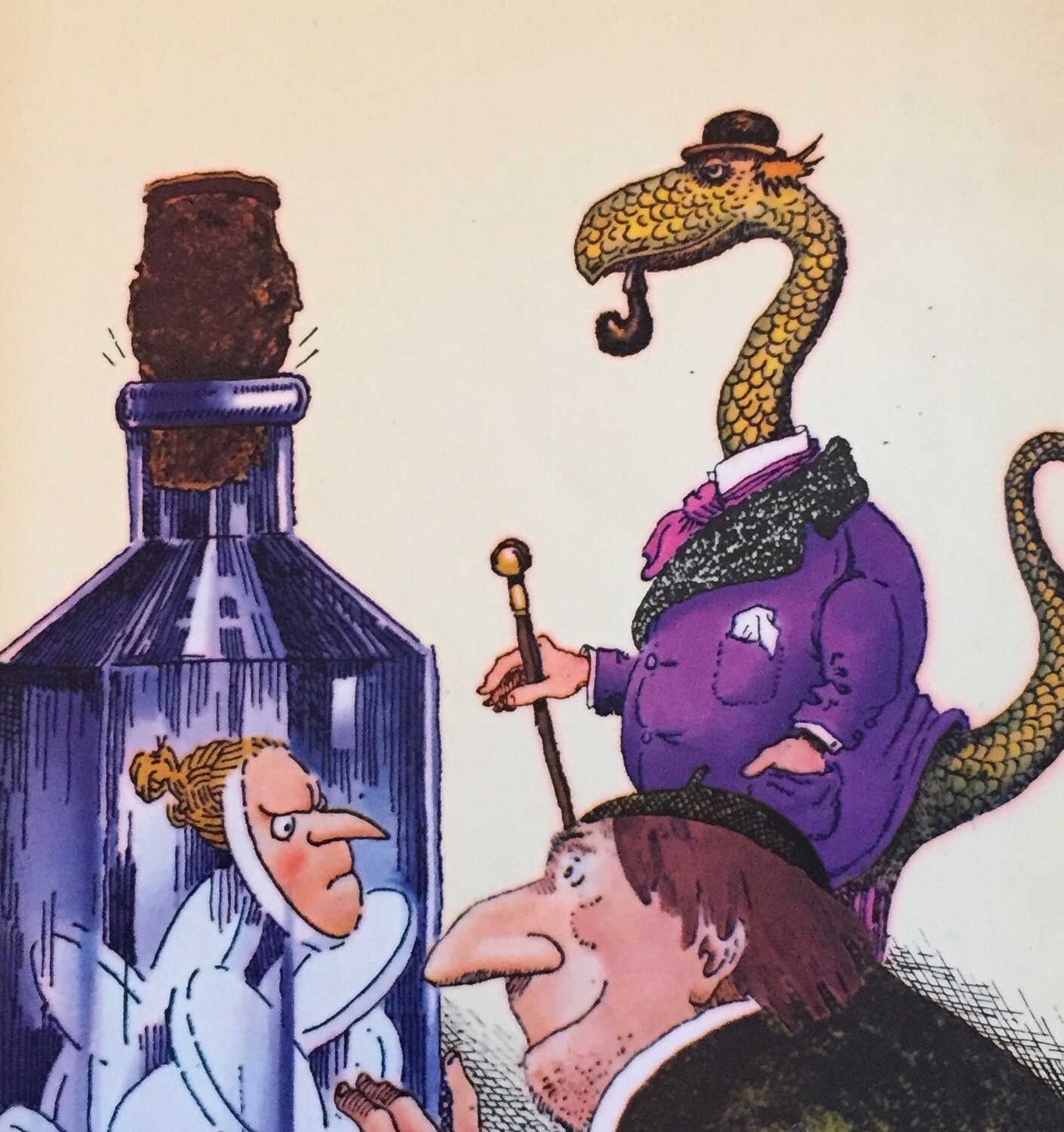 A Book of Nonsense by Mervyn Peake

Non-sense, or Nonsense? Nearly always ‘nonsense’ seems to make more sense than an income-tax form, or any of the other inumerable documents with which life becomes increasingly laden, so that one’s eyes and mind become glazed with non-understanding.

This ‘Book of Nonsense’ is more understandable to me than filling up a census, and certainly it was to Mervyn Peake, who wrote these poems and the other pieces in the book, from ‘The Dwarf of Battersea’ to the unfinished ‘Adventures of Footfruit’ over a periodof some thirty-five years.

He was as aware of the foibles, the gentle and the not so gentle absurdities, the make-believe world of human beings, including himself, as a cat who can sniff a mouse, another cat encroaching on its own domain, a dog, or a bird. But his awareness was not restricted to his mind alone: snatches of conversation overheard in a bus, a man with a nose the size of a potato, running urgently for a train, and missing it, at Victoria Station, never went unnoticed, and he made jottings on anything handy, such as the inside of a packet of Woodbines, or a menu in a Lyons’ Corner House. His own conversation often had a nonsensical element in it. Sometimes this annoyed people; but if they responded, a whole evening might be spent talking a great deal of ‘nonsense’.

One day, going to see some friends in an unfamiliar part of London, we stopped to ask the way of a couple walking in the opposite direction. They gave detailed and kindly advice, and it seemed that our walk was to become fairly extensive. After the formal courtesies of gratitude for welcome information, Mervyn said to these strangers: ‘Oh, if I had only know, I would have brought my camel.’ It did seem funny to me, but I can quite see that to someone else it might have been considered, along with puns, a very low form of humour.

Words were shapes and sounds to him. He saw them, as if he were listening to an unknown language, in shapes. His childhood in China, where he was born in 1911, had an undoubted influence on his work – drawing, painting and writing. In the Chinese written characters, for instance, he had imagine a world of pictures, and he always spoke of the great humour of the people who surrounded that part of his life. His father was a medical missionary – one of the ‘white devils’, as they were called. After many vicissitudes, he earned the respect and love, not only of his fellow-missionaries in the compound, where the Peake family lived, but of the local mandarins, and the coolies who were part of the household. At that time the Chinese still wore pigtails, and the more socially elevated had their feet bound. These physical details may have seemed ordinary enough to a small boy at the time, but when Mervyn came to England it was almost as thought the people of his new, unfamiliar surroundings had a limb missing.

From those distant days, in a very distant world, he had begun to write, and to draw, and to be aware that he held within himself the sense of another world, which was not the world about him. His first book, The Great White Chief of Umzimbooboo Kaffirs. His parents were transformed into Dr and Mrs Silver, the surname presumably deriving from Long John Silver in Treasure Island, a book he later illustrated, but which he already knew by heart, and perhaps he saw himself as Jim Hawkins.

Among his other influences, Lear, Carroll, Belloc, the idealism of Cervantes in Don Quixote, the idiosyncrasies of Tristam Shandy, and the world of the wonderfully eccentric English characters portrayed in Dickens were part of his heritage, literary and visual. Mr Pooter in The Diary of a Nobody overjoyed his permanent sense of the ridiculous, but he was not immune to the perfections of Jane Austen, the world she presented being equally ridiculous, only more proper. A myriad of English poets (Mervyn was no linguist) he could quote at length (and often did), from Shakespeare to Dylan Thomas. I do not think that the writing of nonsense verse or prose was secondary to his other activities, or that they were written as a release from the more arduous task of illustrating. I am sure that they were part of him as a person and as an artist.