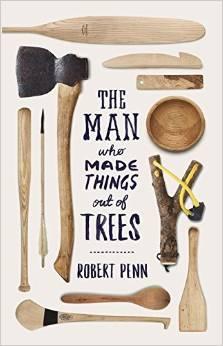 The Man Who Made Things Out of Trees by Robert Penn

Robert Penn from Abergavenny introduces his latest book, published today by Penguin. Click through to hear about the book and some Hay connections:

He is also talking about his book at the Hay Festival Winter Weekend at the end of November: https://www.hayfestival.com/p-10331-rob-penn.aspx 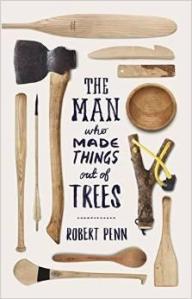 Thanks to Rob Penn for providing this extract from his new book:

Ash wood is pinkish white and disturbingly like human skin when freshly sawn. It dries into an attractive, pale, creamy-white timber. Though second in value to oak for much of history, ash – of moderate weight, strong, elastic, easily bent and readily worked – has always been more versatile and functional. Human beings have used ash to make ladders, tent pegs, butcher’s blocks, boat hooks, beanpoles, looms, bobbins, sieve rims, fishing rods, landing nets, clothes pegs, clothes props, crutches, crates for transporting food, scantlings for stretchers, orthopaedic frames and umbrella handles. During the Middle Ages ash was also used for joists and beams. The best blocks for pulleys and the stays for bells in church towers were made from ash. Ash makes excellent walking sticks and staffs. For much of history, children have known that ash makes first-rate catapults. It makes attractive panelling and flooring, too, and was once a popular choice of timber for pit-props in coal mines.

​Ash has been employed to till and cultivate the land for millennia. It has been used to make ploughs, harrows and wheelbarrows. Ash made the best handles for spades, shovels, scythes, forks, hammers, hoes, rakes, reaping hooks and hop poles. Barrel-makers or coopers made hoops for casks from ash, while it was also common in vernacular chair-making. Ash leaves are palatable and nutritious to animals: in many parts of Europe, the dried leaves are still fed to livestock in winter.

​Ash was formerly one of the most widely used medicinal trees in Europe: its diuretic, laxative and anti-rheumatic properties made it commonplace in cures. Sailors carried crosses of ash for protection at sea, and there was a widespread belief well into the nineteenth century that ash trees could cure warts. Ronald Hutton, my old history tutor and an authority on pagan Britain, has noted that ash features more frequently in British folklore and superstition than any other tree species. Since at least Roman times, ash leaves have been infused in water with yeast and other ingredients to make a mildly alcoholic drink called frenette. It is still made and drunk in a few rural parts of France and Belgium.

​Ash has been used to make paddles for at least 6,000 years. The Norwegian explorer, Roald Amundsen had sledges constructed from ash on his successful expedition to the South Pole in 1911. The finest polar sledges are made from ash even now. Ash was exhaustively used in the manufacture of sporting goods: hockey sticks, hurley sticks, polo sticks, tennis rackets, squash rackets, badminton rackets, kites, parallel bars, cricket stumps, skis, snowshoes, toboggans, snooker cues and baseball bats. Actually, baseball bats in the USA are made from American white ash (Fraxinus Americana) rather than common ash, but the two species are anatomically very similar: even under a microscope, it is hard to tell between them.

​Ash has contributed significantly to keeping man on the move since the dawn of civilization. For at least 4,000 years, the rims of wooden wheels have been made from ash. Before steel, the vast majority of carts, chariots and carriages also had axles and shafts made of ash. Early ancestors of the bicycle were made from ash. Coaches and then car bodies were built around ash frames. Ash was extensively used in boat-frame building and even in the manufacture of aircraft.

​In military history, ash has been of equally paramount importance: it made excellent bows, spears and pike shafts. In Homer’s epic Iliad, Achilles’ spear was made of ash. It was the first choice of timber for the production of lances in the Roman Army. The black squalls of bodkin-tipped arrows that fell out of the sky and wreaked havoc among the French knights during the great battles of the Hundred Years War at Crécy and Agincourt for example were commonly made of ash. The best wooden arrows are still made with ash shafts today.

​John Evelyn, the eminent seventeenth-century diarist and author of one of the earliest treatises on forestry in the English language, published 350 years ago – Sylva; or, A discourse of forest-trees, and the propagation of timber in His Majesties dominions – was emphatic about the importance of ash: ‘In planting a whole wood of several kinds of trees, every third set at least should be ash.’ Henry John Elwes, botanist, forester and co-author of the monumental work of scholarship, The Trees of Great Britain and Ireland, published in eight volumes between 1906 and 1913, considered ash to be the most economically viable of all British timber trees. William Cobbett, the great politicking farmer and campaigning journalist of the early nineteenth century wrote: ‘We have no tree of such various and extensive use as the Ash . . . It therefore demands our particular attention; and from me, that attention it shall have.’

​Beyond a handful of experts, though, ash has never attracted the widespread acclaim it deserves: it has never drawn headlines, plaudits and the attention of poets in the same way oak has, for example. It was never the timber of kings; it was never used to make stately furniture, build vaulted cathedrals or construct Her Majesty’s ships. Yet, in considering the innumerable and important historical uses, I began to wonder if ash might be the tree with which man has been most intimate over the ages. You could argue that the maintenance of a continuous supply of ash has been a strategic necessity, a foundation of domestic life and a concomitance to the promotion of mankind across Europe from prehistory almost until the present.

​Out of curiosity, I began to ask more and more people what they knew about the ash. I questioned woodmen, farmers, housewives, publicans, the postman, relatives, lawyers, plumbers and total strangers I fell into conversation with on trains. A tiny minority of the vox populi I canvassed could name more than five historical uses. A handful recalled the tennis rackets, partly made of ash, which they held in their youth. The farmers all mentioned tool handles. The overwhelming majority of people I asked, though, could name only one use for ash – firewood. Ash makes excellent firewood – but really, is that it? Ash is one of the greatest gifts with which nature has endowed man in the temperate regions of the planet over the course of human history, yet it is reduced in our minds today to a material you burn. How could something so integral to our daily lives for so long, be forgotten so quickly?

One thought on “The Man Who Made Things Out of Trees”